This review is only relevant to a small percentage of people, but it is the most awesome group of people…BMW R Nine T owners. If you don’t have an R Nine T, you should probably still read this to understand what the most awesome people are doing and how you can be also be awesome, or “rad” if you’re older than 40. 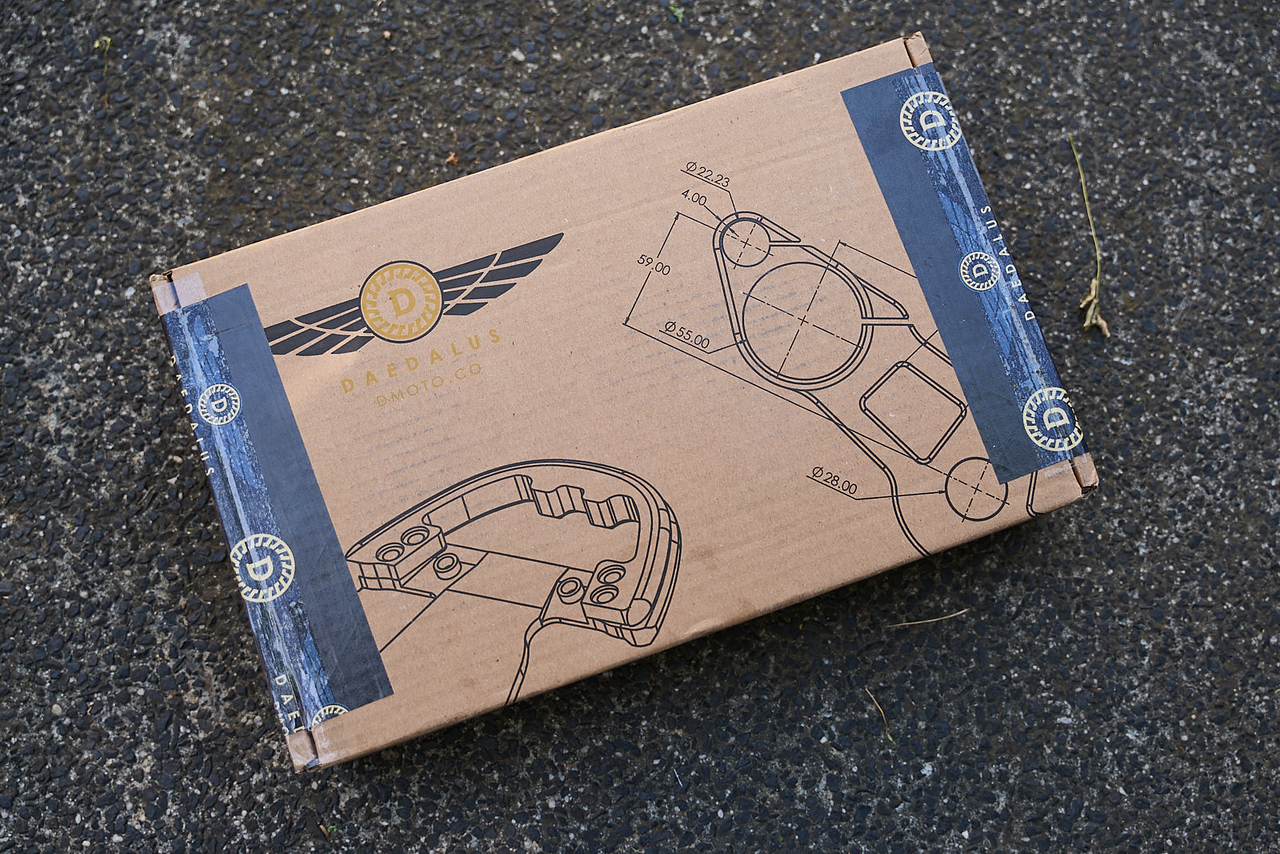 If you want to be awesome, you can follow these simple steps:

If you can’t afford the above:

1. Go to BMW dealership
2. Test ride R nine T
3. Don’t return bike after test ride
4. Go to jail knowing you were once awesome, even if it was only for a fleeting moment in time, and live with massive street cred in jail that will see you rise to the ranks of master criminal extraordinaire.

Just kidding, I would never propose stealing from a BMW dealership…bank robberies are way more profitable, and nobody likes the banks.

Anyway, I got sidetracked. When you are at the peak of awesomeness through owning an R Nine T, there is only one way to go…more awesome! 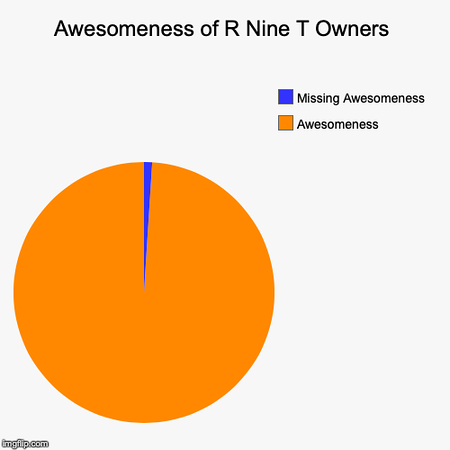 Unfortunately, as you can see from the above graph, BMW R Nine T riders miss the final 1% of awesome through one simple mistake from BMW, that massive diving board at the back of their bikes. I’ve seen Olympic high diving contests conducted from smaller diving boards than this.

The old diving board on the stock BMW R Nine T

If you are 99% awesome like me and interested in the final 1% of awesome, you need search no further…1% awesome has a name and its name is Daedalus. Actually technically, Daedalus is the dude who made his wings out of wax, was vain, flew too close to the sun and fell like a brick out of the sky. There is obviously some similarity with the awesomeness in this review, and as a result, I recommend people don’t try to mount this tidy tail to a plane and fly too close to the sun or it will probably fall out of the sky.

This section is normally reserved for where the writer rambles on about who Daedalus is, how awesome they are…BLAH, BLAH, BLAH…ZZZZZZZZZ. Yeah, there is a reason I’m writing this here and not an award-winning writer earning millions. I’m lazy and selfish so I’ll just give the website About Daedalus

They also have a nice video where there is a motorcycle and a guy in leathers looking awesome with lots to guitar music playing in the background. It also has a person speaking who never actually looks at the camera and pretends to be distracted by talking to someone off camera. Maybe there is a picture of Keira Knightly he likes to talk to like I do at home. 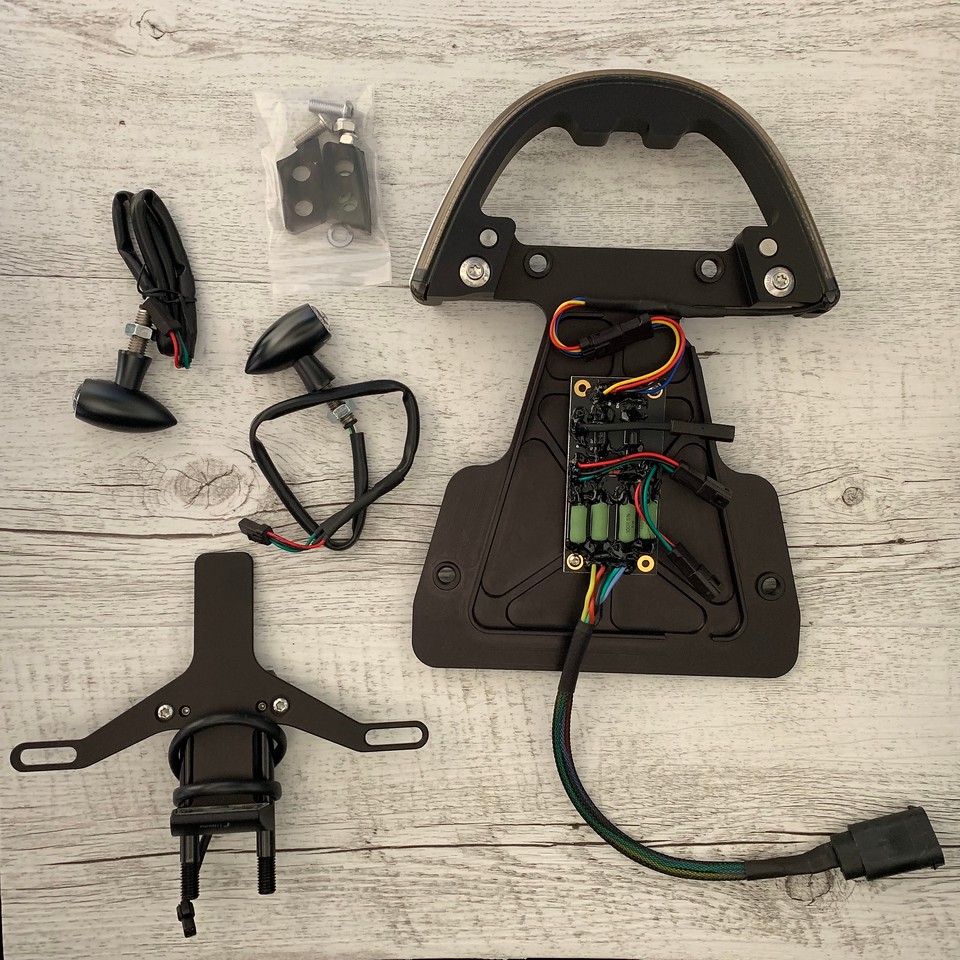 I contacted them on Facebook and asked them about shipping time because they build to order. They told me they could get it to me by Christmas but I needed to use expedited shipping (courier). This is not unusual for people living in Australia where some merchants may send goods by carrier pigeon and 12 weeks later a parcel arrives on your doorstep after you’ve already lodged a complaint about the “lying cheating scumbags who didn’t send your order” and you have to retract it when you see it’s been sitting in the Auspost warehouse for 8 weeks. I ordered on the 6th December and shipped via DHL. It arrived on the morning of the 11th (Same month and year in case you are used to Auspost shipping times). Granted, I paid the average monthly gross domestic product of a third world country to have it shipped via DHL, but it’s still impressive considering Australia is on the opposite side of the globe. Well done!

What is the Daedalus

If you got this far and still don’t know what the Daedalus actually is, I commend you, both for your dedication in reading something for this long without having a clue, and for your stupidity in not reading the title where it clearly states Daedalus “**Tidy Tail**” review, the tidy tail being the relevant part. If you thought tidy tail was a hot woman’s ass, you need to get rid of that sexist attitude and attend some women’s equality classes, this is 2018. You tell em, Ali G!

The tidy tail we are referring to in this case is a way to make the back of your motorcycle rear look tidy, hence the completely logical bringing together of the words “tidy” and “tail”. Manufacturers of bikes are known to be tightwads, giving you b-grade bike rear’s and nice looking fronts, when in reality, most people look at the rear of the bike, because bikes are faster than cars, and because we look good in leathers. Unlike the lycra brigade with their shaven legs, people want to check out our rears because we don’t have to put socks in our pants to make us look good.

BMW, in this case, gave us a set of LED rear indicators but they used weird looking things that look like someone ate road safety triangle, puked it out, and that puke lived in a nuclear zone and had a deformed baby and it grew up became an indicator on a BMW. Actually, these LED ones aren’t bad, you should see the normal ones.

You can order the Daedalus directly from their website.

Daedalus offers lots of configuration options, it’s like the Apple store of tidy tails where you build up the option and see the pricing go up while you cry a little, except they only fit the R Nine T, a little bit like the new Apple laptops that you need 17 different adapters. They give you the integrated indicator option which leaves you with a nice tidy rear and a completely illegal bike in Australia. I like the thrill of illegal activities as much as the next guy or girl, I wear leather jackets sometimes and I even downloaded an illegal movie once, but I’m not taking chances on my bike with the Vic Roads cops…they can smell a defective fart from a 100 yards.

Fortunately, they offer you the safer, less illegal option with the Rizoma Club or Club S indicators. These are bright round indicators, the Club S also act as brake lights in case you get a driver who can’t see straight ahead of them.

Warning: Pricing is ugly and I would wholeheartedly recommend you destroy the invoice on arrival so your spouse never sees it. In my case, I asked my spouse for $500 because she wanted to get something as a Christmas present and said I would order it without actually telling her what it would cost…technically I didn’t lie.

The tidy tail comes in a nice box (that’s sounds dodgy when you say it out loud), with foam padding on the inside to make sure your tidy tail doesn’t get damaged by some rebel DHL employee having a bad day because he only rides a Harley. They give you all the different pieces to make it work, in my case, the tidy tail, indicators and rear number plate, thank you card and some small odds and ends. They give a set of basic instructions that would confuse Einstein, but fortunately also include a link to online instructions which are more detailed. I think it’s just a token card to score extra points for including instructions. Anyone who has used successfully used IKEA instructions without having leftover parts could use these instructions without further guidance.

The construction is pretty damn good. No plastic molded crap, all metal stuff. Well made and apparently waterproof. 10/10

This is it with my printed instructions

Installation of the tidy tail and indicators ranks about a 3 out of 10 from a technical perspective, where 1 is putting on your seatbelt without listening to the air hostess and 10 is building your own nuclear missile with only a home radio and radioactive materials.

If you’re like me, and dumb enough to order the tidy tail without checking whether it’s compatible with the BMW OEM side bag, then difficult goes up to about 12 out of 10, comparative to building a time machine using only a can opener and a penis enlarging pump. 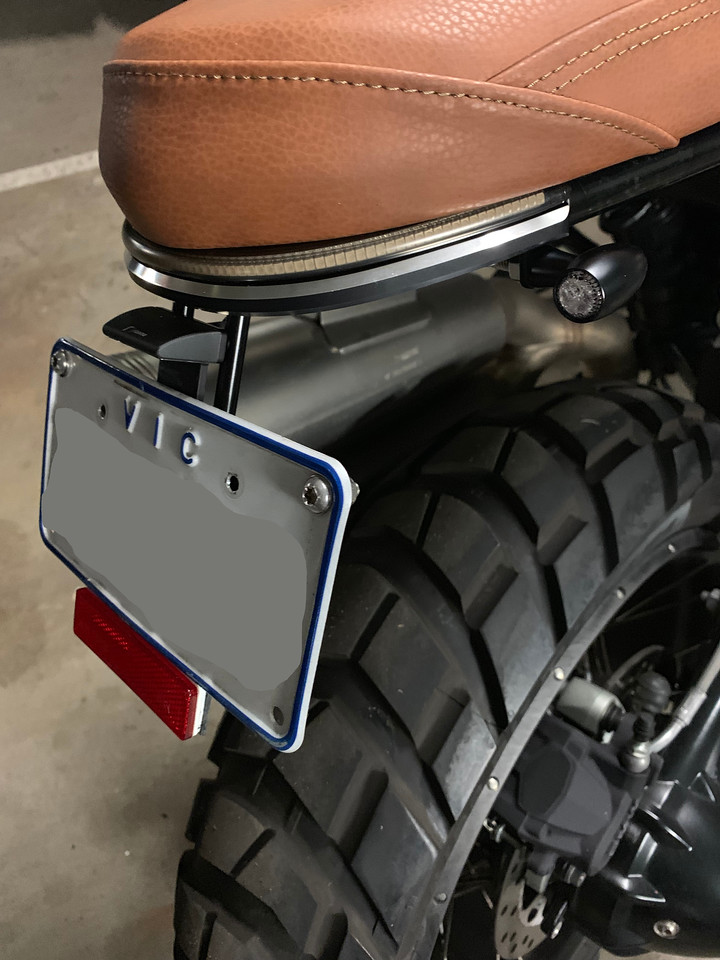 Fitting the BMW OEM Sidebag – Is it possible?

I heard the BMW sidebag could still be fitted with a bit of bending. When I originally looked at this option, I assumed the bending would involve fitting it to the original attachment point which interferes with the Daedalus so this is not possible. As you can see here it is possible. 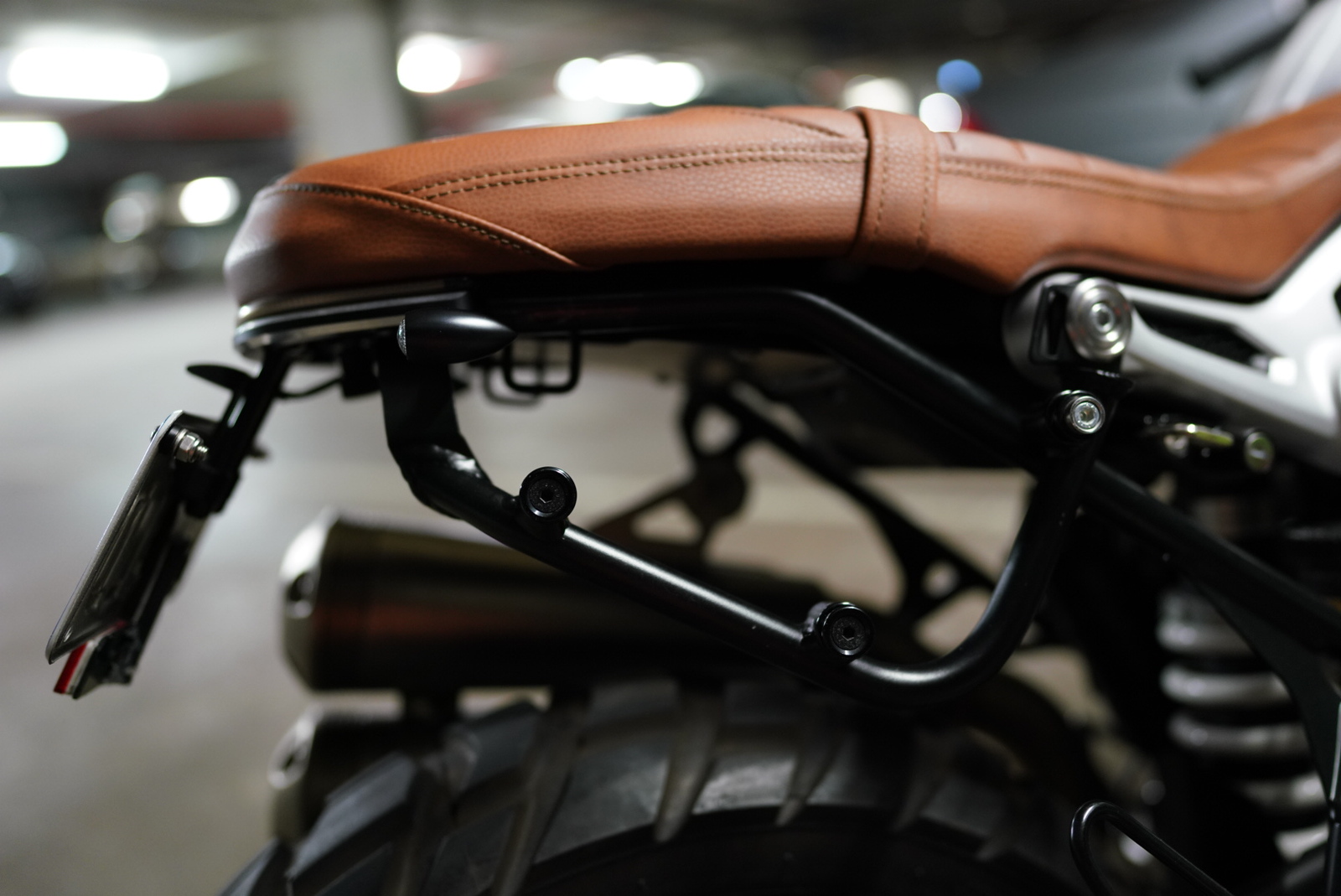 Thanks to LoRez from ninetowners.com, I managed to get it fitted to the correct location, so rather than fit it to the original mounting point on the top, you need to purchase an M5 x 25mm to replace the bottom back right screw. I couldn’t find a torq version so I ended up with a hex version but it still worked. 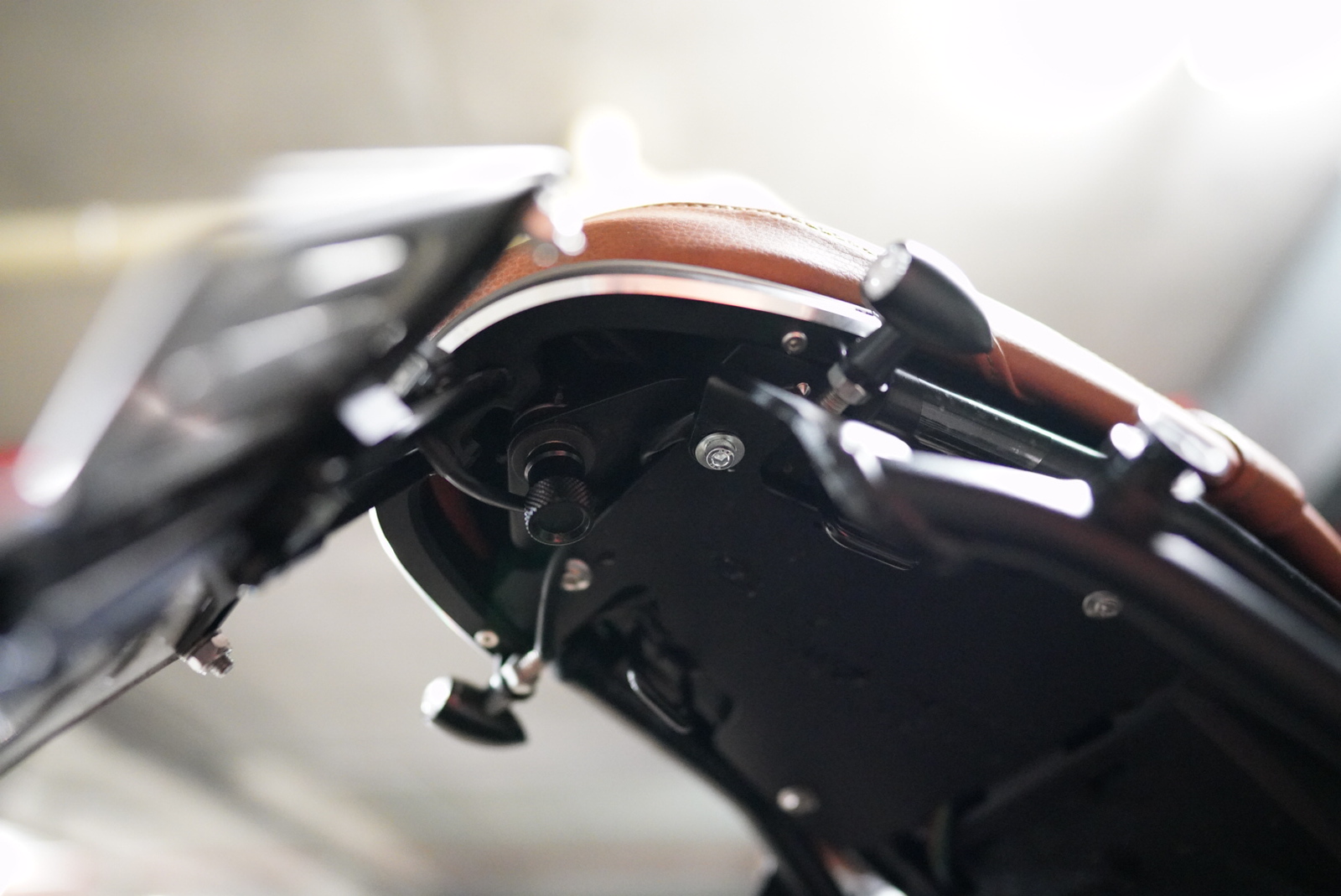 Bending the bag from requires a fair amount of strength, something I am lacking so I had to use some leverage to get it in place, but I would recommend using two people if possible. You need to bend it far enough to avoid sheer force so ensure it fits naturally in place.

With the bag fitted, it is visible to at least 45 degrees so I would say this is sufficient to cover in the legal requirements in most countries but you will need to check the specifics for your country.

How well does it work

Actually, it’s a little harder than it looks, so I am oversimplifying what Daedalus have achieved. They have neat cables, they tie in the indicators to the brake light, resisters to make sure you don’t get warnings, etc so there is obviously a lot of hard work that goes into making these things happen magically. It’s a black box of goodness.

Please note, if you don’t have LED indicators, you will have to have your system flashed to make sure the BMW recognises the indicators, which is something your local BMW dealership can do. 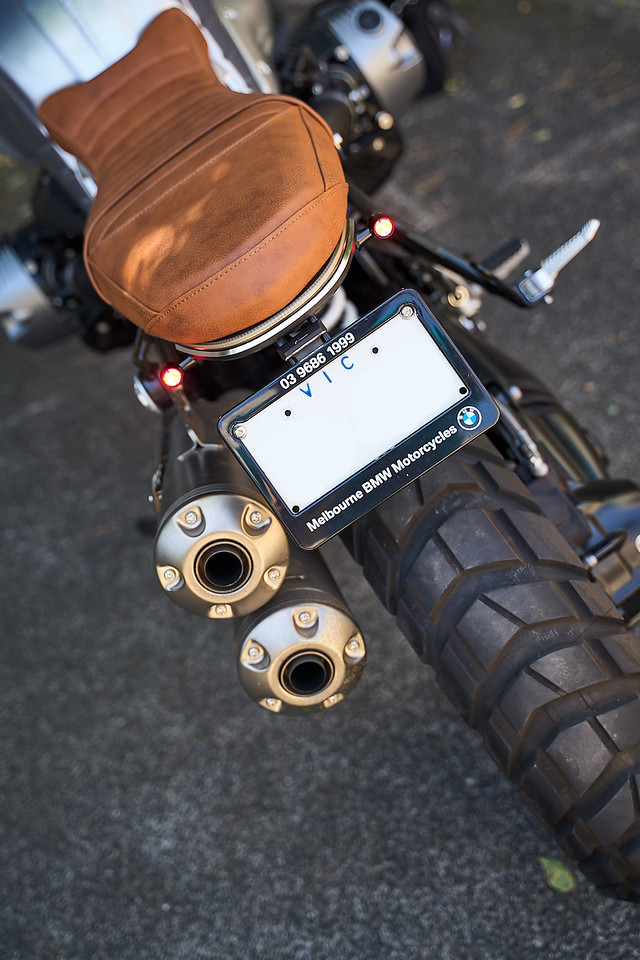 100% awesome achieved immediately. I went out for a ride and 7 women immediately dropped to their knees and asked me to marry them, and those were just the pensioners outside the salvos.

This image puts the R Nine T with Daedalus into perspective if you don’t own an r nine t.

At around $750 with my configuration, it isn’t going to win any awards in the pricing department, not unless you’re a government contractor getting paid $50 per toilet roll, but the quality is outstanding and I think this was always designed to be a premium product for someone who wants a tidy tail that looks good and works out of the box.

There are cheaper options like the fancy bike thing that you can consider if this is too pricey for you, but the Daedalus is of higher quality and a complete plug and play solution.