Flash, or more specifically TTL & HSS has always been Fujifilm’s Achilles heel. Sure you could get HSS and TTL with systems like Cactus and Roboshoot, you could get some level of support, but it wasn’t native and required expensive triggers and receivers.

Then the EF-X500 came out and although there was initial fanfare, it came with a premium price a lack of wireless support. Since then, we’ve been waiting for suitable alternatives and fortunately that day has arrived.

Godox released it’s TT350F which is the first one of their proposed TTL/HSS flashes for Fuji. It’s on the lower end of the power spectrum, but it’s also a good size for a small mirrorless. With the lack of wireless support for the EF-X500, I’ve been working with a Yongnuo YN560 along with a Elinchrom Ranger for the heavier stuff, but there are times where there simply isn’t any other alternative for TTL.

It’s unusual for Australia to be the first (or one of the first) to get something. These days global release dates seemed to be aligned, so when I saw the release date for Adorama on fujirumors as the 30 June, I wasn’t expecting anything better. I emailed one of the Australian suppliers (Hypop) and asked them to let me know when the were expecting stock. I got a response to say stock had just arrived so I put in an order. Pricing was better than I expected, I haven’t followed the pricing of the Godox gear recently but A$139 (US$85 on Amazong) for a TTL/HSS flash is pretty reasonable by any standards . My Yonguo manual flash cost more than that although it is a high power output.

Goods were ordered on Hypopon the 27th June, shipping on the 27th June and arrived on the 29th. That’s pretty much as fast as they can get it out the door and anything faster would be dependent on a small miracle from the Australian postal service. A$139.99 for the flash and A$16.50 for shipping. Shipping is a little on the high side, but still reasonable.

It’s a A$139 Godox flash not a A$500 Fujifilm flash so I try to be realistic with my expectations from a vendor based on price. In the box you are getting the flash basics, the flash itself, a soft cover storage cover that everyone seems to give you, a diffusing cap and a flash stand. The flash and storage cover were expected, the diffuser is a nice touch for a cheap flash, but given the small size, it’s probably something harder to get as an aftermarket.

I wasn’t expecting much on the construction but I was pleasantly surprised. The construction is actually very good given the low cost. It’s not cheap plastic like I encountered with the Yongnuo YN560TX transmitter (the YN560IV flash itself was better – the transmitter was the problem and felt like it came out of a different factory), it has a really nice premium feel to it. The plastic is decent quality, the buttons are firm. There are no machine marks or sharp plastic. The battery door is good, better than some brands I’ve encountered where it feels like they will break, and the lock ring to tighten the flash to the camera seems to have better finishing that some of the lock rings which still have sharp burrs on them.

The only area they lose points is the design of the wide angle panel which requires a bit of effort to get out.

Again, cheap flash, so I wasn’t expecting much on the functionality side but it’s actually has quite a lot built into it.

It has a built in wide angle panel that pushes the zoom to 14mm, and a catch light card that can be extended. As mention in the construction section, it’s a bit annoying to get out.

Wireless built in and you can use it as a transmitter so you can use one as a master and the others as slaves, or use the new Godox X1F when it hits the market. On top of that it has the usual capability

Best of all, all of this is built into a flash which is a fraction of the size of a normal flash.

Using the TT350F is pretty easy for the basic stuff. Switch it on, check it’s in TTL mode and shoot away. Not rocket science from a basic flash perspective. If you want to control the flash compensation, press the “Set” button on the back and rotate the dial up or down, it moves in increments of 1/3 stop. You have 3 stops up and down to work with. If you want to switch between manual and TTL, press the mode button. As mentioned, not difficult as it should be.

For some of the other stuff, it gets a little more complex, but it’s not unusual for flash and if you know what you are doing, you shouldn’t battle to find your way around the TT350.

It can also be used as a transmitter for the AD600 series. I don’t have an AD200 or AD600 so I can’t vouch for that, but having used the X1N before, I can say that the nature of using a flash as a trigger makes the menus a little more complex. A trigger is design to be only a trigger so adjusting the X1 trigger is going to be a lot easier when you are controls a number of groups. If you are wanting to buy the TT350 as a trigger only, I’d recommend waiting for the X1F or get the X1F when it comes out and keep this as a spare flash.

Size of the flash is great. It’s a perfect fit for something like the X-T1 or X-T20 without battery grip. Some of the bigger flashes just look like they dwarf the X series cameras where aesthetically this fits the mold better. That doesn’t make it perfect, the size comes with a series of caveats:

• It’s not a true pro power flash. It’s half the power of a pro flash so you need to respect that. It doesn’t make it any less capable, it’s just not going to light rooms beyond a certain size or have the power to work inside larger soft boxes. If you want something for weddings, wait for the larger flash.

• Recharge time is slower than I’m used to with bigger flashes, around 2 seconds for full power. Again, because it’s smaller, you will be shooting at full power a little more regularly, particularly if you are bouncing it.

• HSS – You won’t be doing any overpowering of the sun, let’s be clear about that. It’s not that the flash is bad, it’s the reality of the level of flash power required to overpower the sun.

On the testing front, I put in some basic tests. I hate on camera flash so I put it through a small softbox with a self portrait. Yes, I have a face for radio, but in the absence of suitable models, I was my only choice. With this test, I shot at f8 to push the flash a little, with portraits you’d be able to shoot at f4 or f5.6 (due to the DOF of APSC) so this is a little more brutal. Even at full power with a small softbox about half a meter (just out of frame) from my head, I wasn’t heavily over exposed. With the Yonguo YN560IV this would have looked like I was attacked by a bleach bottle. The interesting part was that my Cactus V6 ii allowed me to adjust the flash power so that was a nice perk.

I also managed to coerce my daughters into a couple of photos with the softbox, although they weren’t completely co-operative so I have to make do with what I can and I managed to get one shot out in the 10 seconds before they got bored.

Next set of tests I did were completely non-scientific in nature but gives a basic comparison of power between the TT350F and the Yongnuo 560IV.

The room is completely dark at the time of taking the photo, white ceiling is 3m high and room dimensions are 9m x 5.5m although not completely square. Apologies for the state of the room but my wife is away and I’m with 2 kids so this is about as clean as it stays with one parent.

In the second photo, I had the same settings but I pushed the ISO up to ISO800.

As you can see from the comparison, the Yongnuo is still slightly brighter than the TT350F, even when set to ISO800, but that said, the TT350F can still light a fairly large room at ISO800 so it’s achieving what it needs to whilst still maintaining a respectable ISO level.

Yes, it’s not scientific but it’s the closest comparison I could get.

I tried to test outdoors with HSS into the sun and this gives you an indication of how underpowered the flash would be for true HSS work outdoors. In reality, this is not what it’s designed for and I think it would be unfair to have these expectations of it.

This was shot at 1/4000 at ISO200 with the XF-50-140F2.8. I’ve converted it to JPG and used the Chrome film simulation with no lifting of shadows or editing. Excuse the lens flare but I didn’t have my hood on for the test.

On a positive note, as you can see the HSS works perfectly form a timing perspective. 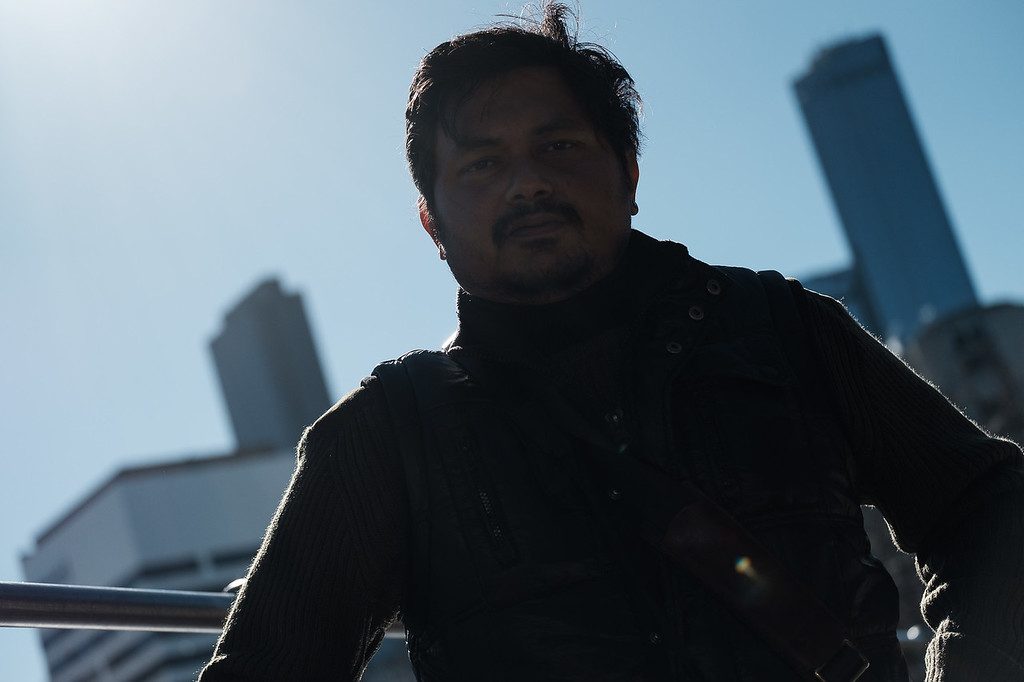 So what can we say about this? Ultimately, given the low price tag, it’s pretty close to perfect if you respect the limitations of it from a flash power perspective. Yes, it isn’t a Fuji EF-X500 flash and it doesn’t have the quality construction of an EF-X500, but it does what it is supposed to achieve and it does it well.

Combined with Godox’s capability in strobes with the AD600 and AD200, this makes it a very capable combination.

If you are in the market for something on the lower end of the price range and you’re prepared to accept the limited power capability, I’d highly recommend this. If not, it may be worth waiting for Godox to release some of the higher power models.